The Bleary Life and Happy Death of a Solo Sports Streamer

«
Previous West Kowloon Docks, March 2015
»
Next Meditations on Being a Fan

It’s 7:03am on a Saturday morning in the dead of bitter New York winter and I’ve overslept. Liverpool are playing Arsenal at Anfield in a game that will – to invoke one of sport’s great cliches – say a lot about both sides’ “title credentials”. Kickoff was three minutes ago.

I bound out of bed towards my small living room. Feeling woozy from the sudden wake up, movement becomes groggy as I grab my MacBook Pro and get into that familiar couch groove. Turning on the laptop, my first move is to check Livescore.com. Liverpool are 1-0 ahead. HOLY SHIT. My heart begins to pound as I move along the next task: find a decent illegal stream. NB. I don’t have cable (too pricey and shit) or a Premier League subscription (no way to purchase in the US).

Throughout the 2013/14 season, Liverpool had played breathless, attacking football; scoring quick, early goals to put teams on the canvas faster than Tyson in his prime. This game would be the apex of its destructive powers. Over the course of the next 20 minutes, Liverpool – a club widely tipped to finish out of the Top 4 – would completely obliterate one of the Premier League’s most accomplished sides and early-season frontrunners.

After Skrtel’s second goal, Raheem Sterling calmly slotted home our third – Jordan Henderson stealing the ball from Mesut Özil for the decisive turnover. And then on 20 minutes, Daniel Sturridge teed up his trademark robot dance for a fourth. This was the stuff of dreams (in fact, thanks to my hasty wake up, I wasn’t entirely convinced that it wasn’t).

Having suffered for so many years at the hands of Arsenal, this was some fucking beautiful revenge. All I wanted to do was scream at the top of my lungs. Trouble is, I’m watching this game all alone (a.k.a. solo sports streamer). My girlfriend is asleep in the room next door, my quiet Brooklyn street is silent, and my landlord lives two floors below us. Any crazed shouting at this time of the day only ends up with me in an episode of COPS.

So, what’s a fan to do? I’m about to have an aneurysm and need to relieve the pressure. Thankfully, there’s a place purpose-built for people with LOUD OPINIONS, who need an outlet for shouting, and where their noise will be soon forgotten. 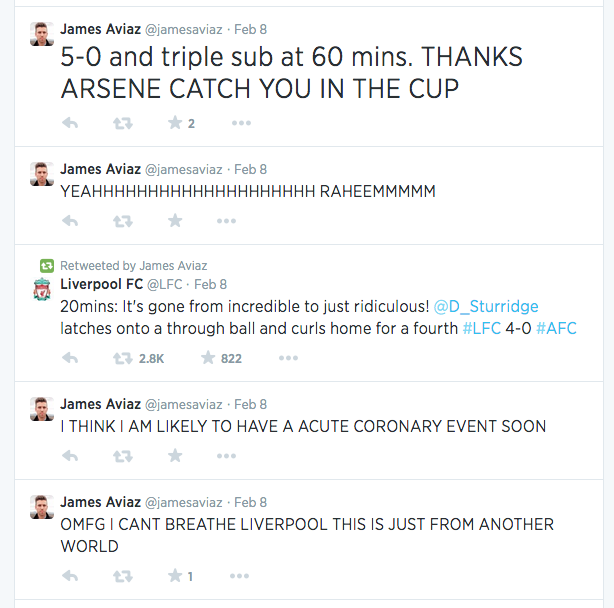 Over the years, I’ve had a lot of feelings about Twitter (and social media, in general). I’ve oscillated between despising it, loving it, trying to understand it, ignoring it, deleting the iPhone app, tweeting 10 times a day, not tweeting for weeks. You get it. But despite it all, I still keep coming back. NB. I’ve abandoned Instagram and Foursquare entirely, and almost killed Facebook several times (seemingly, I can’t let go of those tagged photos circa 2005 with long hair and duckface). And during this Liverpool season – the season during my lifetime in which I’ve watched the most games, had the most opinions, read the most news – I might have discovered why. Turns out, one of Twitter’s great use cases is the solo sports streamer.

Growing up in Melbourne, I was a huge (read: borderline unhealthy) Essendon fan. Above my bed was a shrine to James Hird, while on a wall nearby hung the Herald-Sun 2000 Premiers WEG cartoon poster. In that great 2000 season, I went to every Essendon home game (including three by myself). I told you, “huge fan”.

During those years – my teens to early twenties – I’d become part of a self-dubbed crew known as the “Bomb Squad”. As a rough conglomerate of about a dozen Essendon-loving idiots, we’d trudge to games in any weather – including two journeys in successive years to watch us lose finals to Port Adelaide at AAMI Stadium – to share in the highs (e.g. record-breaking 2000 season) and lows (e.g. 1999 Preliminary Final) of supporting the greatest team in AFL history.

And therein lay the greatest joy of supporting the Bombers at that time: an unwavering camaraderie with the “Bomb Squad”, replete with all its personal jokes, unintelligible player nicknames, and well-worn rituals (e.g. when and where to eat / drink / smoke). Memories of those days at the MCG or Waverly Park or wherever the fixture took us, remain some of the fondest of my life.

It’s now 10 years since I left the “Bomb Squad” in Melbourne for London, then Sydney, and New York. In that decade, my connection to the crew and AFL has waned. In it’s place, however, I have Liverpool and the Premier League. I’d always been a Liverpool fan – my father and paternal grandfather both supported the Reds – but it was not until a 2-year stint in London – a time during which Liverpool won the European and FA Cups – sparked a latent obsession that sticks with me today.

Despite this newfound obsession – one that easily rivals my AFL heyday in its passion – something has been missing (and no smartarse, it’s not a title). You see, unlike with my time as a Bombers fan in Melbourne, I was sans crew. But during the 2013/14 Liverpool season, I found my crew. And weirdly, I hardly knew them.

As it turned out, that game against Arsenal was big. It kickstarted an incredible 11-game winning streak propelling Liverpool towards the most unlikely of League victories (spoiler: it didn’t happen). The apogee of our title charge came after a stirring defeat of favorites Manchester City. The game was an epic-of-all-epics. And I didn’t watch it. I was asleep. In the worst possible time zone. In a 5-star Waikiki resort (so, not all was lost).

HOLY SHIT. Someone noticed that uncharacteristically, I’d not been shouting into Twitter all morning. And it was Ben. Now, Ben is someone I’ve met a few times in NYC and very much consider a friend. We’ve followed each other on Twitter for sometime, but don’t talk often. Ultimately, he’s not someone I’d expected to comment on my silence – let alone notice. I incorrectly assumed those things only happened in IRL situations like being part of the “Bomb Squad”.

In this one tweet, however, Ben displayed all the facets of sports crewdom à la the “Bomb Squad”: camaraderie, humor, and an acceptable level of male-to-male emotional intelligence. Just like that, the penny dropped: Ben was crew. And there are potentially thousands more Bens waiting only a tweet away.

James Aviaz is a contributor at New Albion.

The permalink is http://www.newalbionsports.com/feature/the-bleary-life-and-happy-death-of-a-solo-sports-streamer/. The query is . The key is .